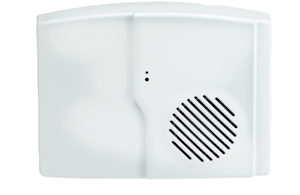 The Indoor Siren Model SE is a battery operated, wireless siren designed for use in Videofied security systems.The siren consists of a sounder and S2View® Spread Spectrum, Videofied, interactive, encrypted wireless circuitry for secure two-way communication with the control panel.
The siren produces an output level of 110 dB at 1 meter during 1,5 to 3 minutes, in alarm.
The siren is typically installed in hallways, foyers, or other similar areas where sound can resonate so occupants can hear alarms. A dual tamper function provides detection for both wall and cover tamper.
The siren is powered by four alkaline batteries that can last four years, depending on the amount of siren activity. The siren transmits a check-in signal every eight minutes that includes its unique identification code, along with the tamper condition and battery status.